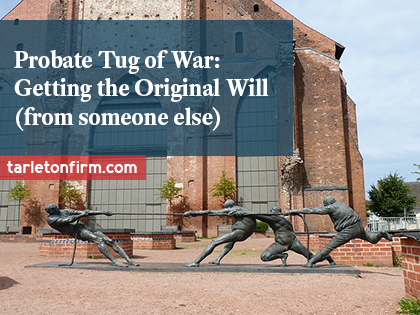 Beneficiaries under a Will must have the Will probated for it to be effective.  Unfortunately, the person with the Will sometimes sits on their hands.  For example, what should a person do when a parent has died, but the step-mom (whom you believe has custody of the Will) isn’t doing anything with it?

Out of respect for grief and family harmony, children often allow some time to pass after a death before asking a step-parent about the deceased biological parent’s Will that they know or believe exists.  But, after some time has elapsed, the children would like to know whether there is, in fact, a Will and whether anything is going to be done with it.

Why does this happen?

This issue can come up in any family, but more often it’s in a blended family where a step-parent has custody of the deceased parent’s important documents and children have never seen a copy of a Will.  In blended families in particular, there are some practical reasons why the step-mom would delay production of the Will or appear vague about its existence:

> Fear of losing ownership or occupancy of the home.

> Fear for the cost of probate or hiring attorneys.

> Emotional inertia or resistance to acknowledging the death.

These are a reasonable response to losing a loved one.  Unfortunately, the surviving spouse’s lack of communication in many cases forces children to guess the reason for delay.  After a while, the surviving children (or other heirs) will begin to suspect the delay is not routine but intentional.  They will wonder whether the surviving spouse is taking advantage (maliciously or not) of the delay to hide or misuse assets that belong to the deceased person’s estate.

The cost of assuming there is no Will.

The costs of probate can make it difficult for a child in this scenario to decide how to proceed.

One option is for the child to take advantage of being an heir of the parent’s estate under the laws of intestacy (the laws regarding who inherits when there is no Will) and apply to open a probate as if no Will exists.  By initiating the probate in this manner, step-mom may be persuaded that she needs to file the Will, particularly if it gives her more assets that she’d receive under an intestacy and appoints her as executor.  The child could  seek to be appointed as the administrator (the equivalent to an executor in estates where no Will exists).  Unfortunately, the child would need to defeat the surviving spouse’s priority to serve as administrator, and if a Will is later filed it will likely override much or all of the work done by the child.

If the child genuinely believes that a Will exists and knows who has possession of it, then attempting to get the Will delivered may be the best priority.

The first step is to work with an attorney to send a formal demand letter for the person in custody of the Will to deliver the Will.  The Texas Estates Code, under Section 252.201, requires a person in custody of a Will to deliver it to the clerk of the court that has jurisdiction over the deceased person’s estate.  So, if the dad died as a resident of Dallas County, Texas and step-mom has the Will, then step-mom has a duty to deliver the Will to the Dallas County clerk (and not to the child or other beneficiaries).

Note:  there is no duty to have the Will probated under Section 252.201.  The Will must merely be delivered to the county clerk, and it is up to the heirs or other parties to apply for probate if it is necessary.

Of course, if you send a demand letter, it may be ignored by the recipient who (because she has not hired legal counsel) may think that ignoring it will make the problem go away.  On the other hand, this may spur the step-mom to hire an attorney, which may be beneficial in terms of getting the process moving forward if there is a Will.

If the person in custody of the Will fails to file it, your next step is to file a sworn written complaint with the court with the proper jurisdiction (such as a local probate court in larger counties) alleging that the person who has the Will has failed to produce it.  The authority for this is found under Texas Estates Code Section 252.202.  The complaint should tell the judge why you believe step-mom has the Will.  For example, maybe she told you the contents of the Will, like “your dad gives you his car in his Will”.  If your complaint is convincing, the judge will sign an Order to Show Cause requiring step-mom to appear and explain why she is unable to deliver the Will.  Under the statute, the person cited to appear (step-mom in this scenario) must be personally served.

There are three general responses to the Show Cause citation:

> The step-mom shows up and delivers the Will, thus concluding the matter of whether a Will exists.

> The step-mom shows up and denies existence of the Will. If that is anticipated, you will want to work with your attorney on questions to ask the step-mom at the hearing, such as the circumstances that lead you to believe a Will exists, such as step-mom’s comments about what the Will said.

> The step-mom ignores the citation.

If the step-mom fails to appear, or appears and fails to show good cause for why the Will hasn’t been produced, the following remedies are granted under the Texas Estates Code:

> The judge may have the step-mom arrested and confined until the she delivers the Will (Section 252.203).

> Also, the step-mom may be sued for damages caused as a result of refusing to deliver the Will (Section 252.204).

A practical point: If it is necessary for you to go through this process to get the Will, this helps you challenge step-mom’s appointment as executor based on her unsuitability.  If she wouldn’t deliver the Will, then she’s not responsible, wants to delay administration of the estate, and doesn’t mind creating unnecessary costs.

This article if for general informational purposes only and is not offered as legal advice. Legal counsel should always be obtained regarding your individual circumstances.  An experienced probate attorney can further explain the process to you, assist you with preparing the necessary documents for probate, and make court appearances. To learn more, please visit our website at www.tarletonfirm.com or call us at (214) 935-9004.  Although we are located in Dallas, we serve clients all over Texas.