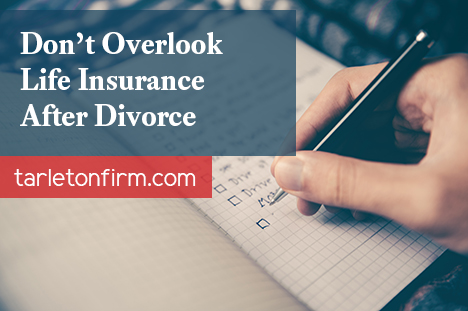 After a divorce, most people assume that the divorce decree has taken care of everything relating to their shared assets and finances.  Unfortunately, this is not always true.  After a divorce decree is signed, there are several important steps that need to be addressed to fully complete the process, particularly in the area of estate planning.

One vital step after a divorce is to update estate planning documents and beneficiary designations, or to get an estate plan in place if one has never been prepared.  For example, if your planning documents were based on a marriage relationship that no longer exists, it is probably necessary to update your documents to reflect your desires for your executors and agents.  Also, it usually the case that you do not intend to keep an ex-spouse as the primary beneficiary of a life insurance policy or retirement account.

What happens if I don’t update my beneficiary designations for insurance after my divorce?

If you fail to update a life insurance beneficiary designation, Texas law may adversely affect your estate plan after your divorce or your old designation may not adequately address your new family circumstances.   For this reason, beneficiary designations should be reviewed and updated as soon as possible after a divorce, especially if you want to keep an ex-spouse as a beneficiary. In general, under Texas law a divorce will void any beneficiary designations in favor of a former spouse for any retirement plans or life insurance policies which are not provided through an employer.  Relying on this default provision, however, is very risky as there are exceptions to it that require a careful reading of the statutes and applicable law.

Section 9.301 of the Texas Family Code provides that a divorce decree will render ineffective a beneficiary designation in favor of a former spouse for a life insurance policy unless one of the following three exceptions applies:

Problem 1 – Leaving Insurance Proceeds to Minor Children.  Our above example raises a new problem when we ask: who inherits now?  Let’s assume that Husband’s sole heir is a minor child, and that Husband has no Will.  Minor child may inherit the policy proceeds (as Husband would have likely wanted), but it may be necessary to have a guardian appointed or ask a court to create a trust in order for the child to immediately access the money.  If Husband had instead taken the time to write up a new Will after the divorce, he could have had a say in who managed the funds for the child and what the terms of the trust would be, and helped avoid the need for a guardianship.

Problem 2 – Insurance Proceeds Incorrectly Paid to Disregarded Beneficiary.  Another problem with failure to update beneficiary designations after divorce arises when we look at Subsection (c) of Section 9.301, which states that an insurer who incorrectly pays the proceeds according to the beneficiary designation (i.e., to former spouse) is not liable to pay the correct beneficiary (or correct estate) unless the insurer: receives the proper written notice before paying the proceeds, and the insurer has not interplead the benefits into the registry of the court (meaning the insurer has not formally asked a court to decide who owns the proceeds).

Don’t force a beneficiary to chase down proceeds from the wrong beneficiary, or to have to fight with a life insurance company to collect the proceeds – make sure the beneficiary gets updated.

Problem 3 – Disputes Over Policy Owner After Divorce.   Sometimes, a divorce decree only contains general language about life insurance policies and leaves open the possibility of a later dispute over who owns the policies. For example, in a 2017 case in the Northern District of Dallas (Primerica Life Insurance Company v. Purselley, et al.)[1] a husband made his wife the owner of a $300,000 life insurance policy about a year before they were divorced.  The husband died twenty years later, and the former wife, Sherry, had been paying the premiums during that time.  In the interpleader action, the husband’s children asserted Texas Family Code 9.301 as their basis for being entitled to the entire proceeds.  The court disagreed with the children, however, and agreed with Sherry that the policy had been given to her as her separate property before the divorce and that the divorce decree could not divest her of her own separate property.  The court also stated that Texas Family Code 9.301 did not apply where the insured has no ownership right to the policy.

As a result, it is important for anyone going through a divorce to take special care in identifying which assets are the separate property or community property of the spouses, and to work with an attorney to make sure that life insurance policies are specifically listed in the decree with the policy number and insurance company name.

Problem 4 – ERISA Preemption.  Employee benefits, including employer-provided retirement plans or life insurance, can be subject to federal ERISA laws.  When this is the case, federal law preempts state laws, and state law does not apply to the beneficiary designation.  This can lead to surprising results for heirs if state laws (such as Texas Family Code Section 9.301) would have otherwise caused a beneficiary (such as en ex-spouse) to be disregarded.  This is because under 29 U.S.C., Section 1104(a)(1)(D), ERISA law requires employee benefit plan administrators to follow the plan documents.  In the case of an employer-provided life insurance benefit, an ERISA-governed life insurance policy will pay to the designated beneficiary according the governing plan documents, regardless of state law or equitable arguments to the contrary.

The effect ERISA can have on employee life insurance was illustrated in a recent Seventh Circuit case out of Illinois, Cehovic-Dixneuf v. Wong (7th Cir. July 11, 2018), over two life insurance policies, one for $263,000, and another for $788,000.  The policies were owned by Georges Cehovic, who obtained the policies through his employer, and named his sister as sole beneficiary.  When Georges died, his ex-wife, Ms. Wong, alleged that during the divorce she was never told about the policies, and she even attempted to reopen the divorce case to undo the decree (local state law required spouses to disclose all assets in order to have an enforceable divorce decree).  Wong also asserted that all policy premiums were paid by Georges individually, and that the policy should fall under ERISA’s safe harbor provisions (which would mean ERISA does not govern the policy).

The District Court disagreed with Ms. Wong.  The court looked at the plan documents, which explained that the employer performed all of the maintenance and administrative functions for the policy, therefore it did not fall under the safe harbor provisions and ERISA did apply.  As a result, the District Court awarded the life insurance proceeds to the sister.  Although this case worked out as Georges would have wanted, imagine if it had been the other way around – what if Georges had instead listed his ex-wife as beneficiary but forgot to change it after the divorce?  Because of ERISA preemption of state laws, the likely result would be the opposite of Georges’ intent and the ex-wife would have received the life insurance proceeds.

Don’t rely on a divorce decree or default provisions under Texas law to cover you when it comes to planning for your life insurance.  As you can see in the cases above, unintended consequences can result without proper planning.  It is best to take a proactive approach and consult an estate planning attorney after your divorce.  Be sure to provide the attorney with a complete copy of your divorce decree.

If you need to speak with an attorney about life insurance & estate planning, contact our firm today for a free consultation at (214) 935-9004 or visit our website at  www.tarletonfirm.com.